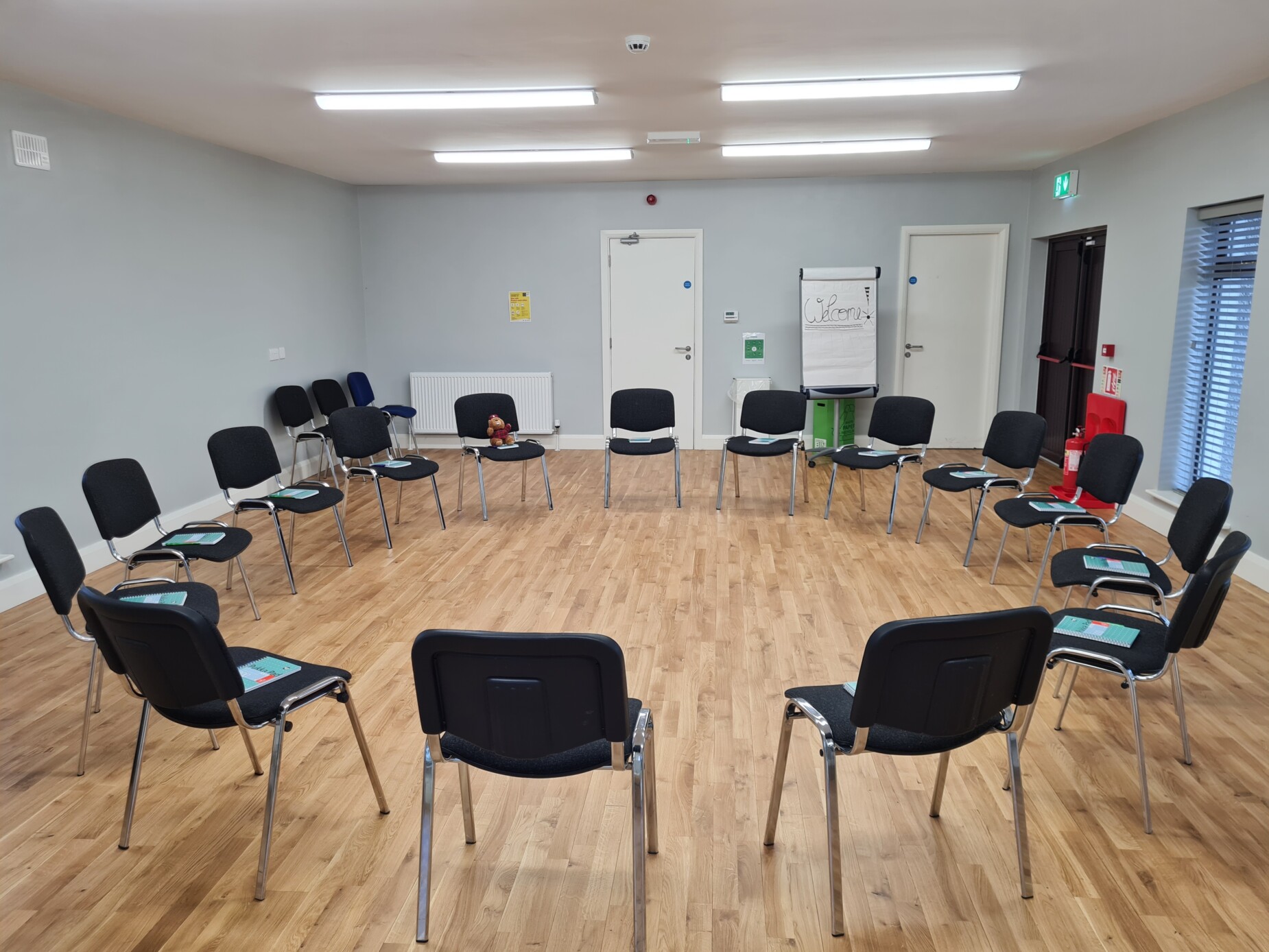 On 8 and 9 September 2022, Dr. Ian Marder (Assistant Professor in Criminology, Maynooth University School of Law and Criminology) co-facilitated a dialogue process in Dublin West, in collaboration with community members and Gardaí. Their goal was to explore the extent to which restorative practices could be used to facilitate dialogue and build understanding between young Black adults who live, and Gardaí who work, in Blanchardstown.

Restorative practices (RP) are a set of principles, skills and processes that enable relationship building and participatory dialogue. Facilitators structured the conversations using ‘circle processes’, meaning that the participants sat in a circle and the right to speak revolved around the group sequentially. The circle process aimed to equalise power among participants and ensure that everyone present had the opportunity to speak uninterrupted in response to the questions asked. The questions aimed to build understanding and relationships through the sharing of personal experiences and perspectives. Circle processes use a talking piece to indicate whose turn it is to speak and to listen, and to prevent anyone from being interrupted during their turn to speak.

The organisers also drew on the field of dialogue (Schirch and Campt, 2007; Bohm, 2014; Johnson and Weisberg, 2021) when designing the questions and activities. Their aim was to build understanding by sharing experiences, ideas and information about a common concern – not to debate, convince others of a perspective, or make assumptions about or challenge an experience that others shared. Dialogue supports participants to take in more information and perspectives than they previously had, and help them forge a new, broader understanding of a situation.

The dialogue process was the second phase of a three-phase project called The UBUNTU Project. The UBUNTU Project is funded by the Irish Research Council New Foundations scheme, and obtained ethical approval from the Maynooth University Social Research Ethics Subcommittee.

In the first phase, a mixed group of eleven young Black adults living in Blanchardstown and Gardaí who work in Blanchardstown received three days of restorative practices training. Training was provided by project partner Childhood Development Initiative, and delivered by a White male with experience of working with An Garda Síochána and a Black female who is a community development worker. The training took place in May and June 2022, after each group was prepared in separate meetings.

Ian then worked with the trainees to co-design a dialogue process. The group provided feedback and ideas in response to an initial draft, before two persons from the group (one Black community member and one Garda) volunteered to co-facilitate the dialogue with Ian. The three facilitators collaborated to develop and refine the plan for the dialogue process and prepare for its delivery. Ian worked with project partners and other local stakeholders to identify additional Garda and community participants for the dialogue. These persons were prepared in separate groups before consenting to participate.

Six young Black adults and six Gardaí participated in the dialogue process. Over two days, participants engaged in a variety of circle processes, discussions and other activities, including work in mixed pairs, in mixed small groups, in caucuses, and as a whole group.

The dialogue was divided into four parts. First, the participants got to know each other, discussed their motivations for attending, and agreed on a set of guidelines for how they would be together over the two days. Second, the group shared and explored their experiences of Blanchardstown and belonging, identities and stereotyping. On the second day, the group shared experiences and perceptions relating to policing, before considering any questions they still had and what they wanted to see in the future.

Both days began with activities that gave participants time to get to know each other, and closed with lunch and reflective circles. The facilitators led a reflective debriefing following each discussion.

The funding from the Irish Research Council enabled the hiring of a Research Assistant, Katharina Kurz, to collect and analyse data to study the project. The research questions guiding the study are:

The dataset includes observations of the organising and preparation meetings, the training days and the dialogue process itself. The third and final phase of the project involves everyone who participated as project partners or as training or dialogue participants being offered the chance to participate in an interview to discuss their experiences of the project.

Ian led the project and co-facilitated the dialogue process. He said: ‘I was delighted to receive funding from the Irish Research Council and support from partners in An Garda Síochána, Sport Against Racism Ireland, Insaka-Ireland, Childhood Development Initiative and others for this project. I have facilitated restorative practices between Gardaí and communities previously, but never with funding to evaluate the project and train co-facilitators from those groups, nor with such broad or high-level support from Garda management. Now that we have a model of practice developed, we should scale this work up, with Garda and community support.’

Finbarr Murphy (An Garda Síochána) is Chief Superintendent in Dublin West, which includes the Policing District of Blanchardstown. He said: ‘I have been involved in restorative practice initiatives within An Garda Síochána for over 20 years. I have seen how it can assist in building positive relationships within the community and address conflict, both within a community, or where there is conflict between An Garda Síochána and members of the community. As partners in the UBUNTU Project, we consider this a great opportunity to have a rich and meaningful dialogue with young Black adults living in the area. It is an opportunity to extend our use of restorative practice and to nurture further our relationship with the community that we serve.’

Claire Casey (Restorative Practices Programmes Manager, Childhood Development Initiative) organised the training programme. Claire said: ‘It would be fantastic if this helped An Garda Síochána take a systematic approach to improving the relationships between Gardaí and young Black people. Restorative practices have proven beneficial in this respect in other jurisdictions. We are hopeful that the use of dialogue and circles will generate the same positive outcomes here as they have elsewhere.’

Eric Ehigie (Politics Coordinator, Black and Irish) helped identify participants for the dialogue process. Eric said: ‘It is great to see restorative mechanisms being used to build bridges between the Black, Irish community and An Garda Síochána. Creating communal bonds through restorative principles – with their emphasis on understanding, connection and respect – has tons of potential. I look forward to seeing where this leads. The parties involved and the wider community has everything to gain from the process and, considering where we are currently with regards to community relations, absolutely nothing to lose.’

Ken Mc Cue (Cultural Planner, Insaka-Glentoran Football Academy and Titans Athletic Club), helped identify community participants. He said: ‘I have witnessed serious fractures happening in community cohesion. This is most apparent in the relationship between the Black Youth of the suburbs and An Garda Síochána. Having worked in the community development process following the 1981 Toxteth riots in Liverpool, it was evident that considerable effort had to be made to repair the relationship between the Merseyside Metropolitan Police and the local Working Class community of Liverpool 8. I see parallels here in the lack of intercultural competence among Gardaí along with their use of ‘stop and search’ and ethnic profiling of Black Youth. I believe the UBUNTU Project will help address issues with both parties working to achieve understanding and consensus through the restorative process.’

Foluke Oladosu (Community Leader, Ferrercairn Community and Youth Centre) was one of the trainers who delivered the three days of restorative practices training to eleven young Black adults and Gardaí on behalf of Childhood Development Initiative. Foluke said: ‘A family bears a child, but it takes a village to raise a child. This is an old African saying. It means that it is the community’s duty to impart good values to its younger generation by living in an exemplary way and by correcting behaviour gently. The aims and vision of this project are valuable because restorative practices can help build this sense of community and shared responsibility in a modern world.’

Miriam Ryan (Area Manager, Blanchardstown Youth Service, Foróige) helped identify participants for the dialogue process. She said: ‘This process is a unique and progressive way to engage with, hear and recognise the voices of Black Irish young people in a supportive environment. Restorative practice will enable positive communication and relationship building which will hopefully lead to positive changes in the local community. It has been great for Foróige to help identify young people, and certainly they have appreciated the opportunity to be heard and to engage with An Garda Síochána locally.’

Katharina Kurz (Research Assistant, Maynooth University School of Law and Criminology) is studying the UBUNTU Project. Katharina said: ‘This work is unique to the Irish context. Its importance lies in its amplification of the lived experiences of its participants. This allowed the dialogue process to address the structurally embedded causes of separation, including stereotyping and “othering”, which opened a potent space that feeds into decolonial and social justice agendas.’

The project is called the UBUNTU Project after a relational, African philosophy that roughly translates as ‘humanity’ and is sometimes expanded to the saying ‘I am because we are’. The UBUNTU Project is a collaboration between Dr. Ian Marder and An Garda Síochána, Sport Against Racism Ireland, Insaka-Ireland All Africa Youth Movement and Childhood Development Initiative.

The UBUNTU Project is funded by the Irish Research Council’s New Foundations scheme. Additional funding for event space and materials was provided by An Garda Síochána and by Maynooth University School of Law and Criminology. Several organisations provided additional support, including Foróige Blanchardstown Youth Service, Black and Irish, and Parslickstown House Community Centre.