PACE (Circles of Support and Accountability)

PACE aims to support the integration process of people with criminal convictions and bring about positive change in their lives. It works with people who are dealing with a range of issues including addiction, mental health issues and homelessness all of which are compounded by their offending behaviour. It provides prevention, training, social enterprise and accommodation services. The Prevention Services work with people with convictions for harmful sexual behaviour who are considered to be at substantial risk of reoffending sexually. There are three programmes under this heading: the Safer Lives Treatment Programme, the Foothold Floating Support Programme and the Circles of Support and Accountability (CoSA) programme.

Based on restorative principles, CoSA trains volunteers to assist individuals in their efforts to live a life free of crime and harmful behaviour. It is based on the concept of “no more secrets”. The Core Member attends on a voluntary basis and cannot be mandated to attend. 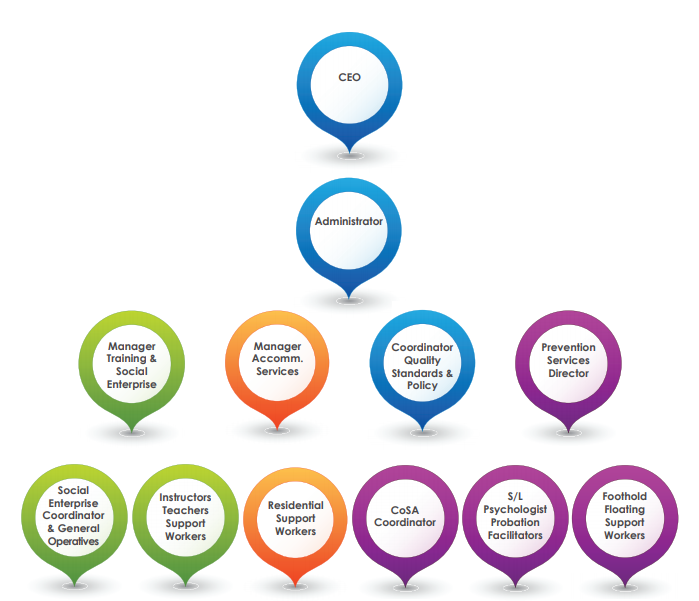 All PACE Support Workers are trained in restorative practices and incorporate them into their keyworking roles. Other staff have various levels of training in restorative justice.

Since 2015, PACE has trained over 60 volunteers to work with the Circles of Support and Accountability programme. The volunteers work within a circle of between four and six trained volunteers and one ‘Core Member’ (the person with the conviction for harmful sexual behaviour). For many of the Core Members, volunteers are the only other people they see in their week who are not being paid to see them. Ten volunteers spent over 500 hours volunteering with CoSA in 2019. PACE averages five Circles a year with between 20 and 30 volunteers. The Inner Circle of Volunteers + Core Member is supported by the work of the Outer Circle that consists of the CoSA Coordinator, the Supervising Probation Officer, a Liaison Garda and other relevant professionals.

The programme trains a group (or ‘Circle’) of volunteers to work with the Core Member alongside the professionals who are working with them. The training covers a wide range of areas with a particular focus on understanding sexual offending behaviour and the impact on victims.

PACE is primarily funded by the Probation Service and is supported by CDETB, POBAL and the Garda Síochána among other agencies.

PACE works with people with criminal convictions for a wide range of offences. CoSA is a programme targeted at people with convictions for harmful sexual behaviour in the community who are considered to be at medium/high/very high risk of reoffending sexually. All CoSA participants are living in the community under the supervision of the Probation Service and are assigned a Garda Liaison Officer.

Referrals are made by Supervising Probation officers with the support of the Liaison Garda and local multi-agency Sex Offender Risk Assessment and Management (SORAM) teams.

CoSA is a rehabilitative programme offered by PACE as part of its prevention services. CoSA is an evidence-based practice, based on restorative principles, and aligned with both the Risk-Needs-Responsivity (RNR) model and the Good Lives Model (GLM). CoSA brings together a group of between four and six trained volunteers to work with the Core Member. The aim of the programme is to reduce social isolation and to increase agency by holding the Core Member accountable for choices they are making in their life currently and prevent further harm.

CoSA Core Members are people who have been convicted of a sexual offence(s). To participate in CoSA, they have to take responsibility for their offence and the behaviour that resulted in the offence, acknowledge the harm caused, and demonstrate a genuine commitment to turning their life around by voluntarily entering into a Circle that focuses on providing support whilst holding the Core Member to account for how they are living now. They agree to communicate openly and honestly with their professional network and with the volunteers in order to identify offence triggers and to avoid lapses and reoffending.

The volunteers meet weekly with the Core Member, offering advice and support, involving them in social activities and encouraging the Core Member to take responsibility for their choices. The programme runs for a period of approximately 12 to 14 months. The social interaction that takes place with volunteers represents a gateway to the wider community – it works as a starting point to break down barriers that may inhibit community reintegration as well as increasing tolerance. Ordinary people get to know the person beyond the ‘sex offender’ identity that frequently mediates their interaction. This process is accompanied by an outer circle of professionals and a CoSA coordinator who mediates between the inner and the outer circle.

Reasons for incompletion in 2018: unsuitability (1) and relapse (1)

All CoSA circles involve community participation in the form of volunteers.

Adults over the age of 21 years

An evaluation of CoSA (and other PACE prevention services) was completed in 2018. Feedback from participants suggested they were highly satisfied with the support received and reported having experienced positive or very positive personal and life changes since their involvement with CoSA.  CoSA was perceived by participants as providing a possibility to have a ‘sense of normality and a feeling of acceptance’. CoSA was also described as being useful in that it assisted participants to learn to integrate other’s points of view into their own decisions and to ‘look outside the box’.