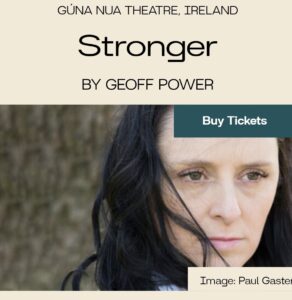 Inspired by true events, Stronger tells the gripping story of Jan, a teacher who is sexually assaulted by her student. As Jan journeys through the legal system, she struggles to find closure and her life is in danger of falling apart. You can now book to see Stronger as part of the Dublin Theatre Festival, from 30th September to 9th October 2021. On October 7th, the showing will be accompanied by a public forum on restorative justice. Here, Dr. Ian Marder interviews playwright Geoff Power on the themes of restorative justice in Stronger.

Geoff, thanks so much for speaking to us today. Can you tell us about the plot of Stronger and how it relates to restorative justice?

Stronger is about an art teacher called Jan, who works at a school for troubled teenagers. One of her students, Damon, is talented, but when he misses two academic years because of a traumatic event at home. Jan is doubly keen to accommodate and encourage him. One lunchtime, however, at the end of class, he rapes her.

The play looks at the impact that this brutal attack has on Jan and on her marriage. Jan’s husband, Robert, is also a teacher. He tries to support her as best he can, but Jan increasingly pulls back from him and from her career, especially after an early guilty plea by Damon deprives her of her moment in court.

Believing she has been silenced and sidelined by the justice system, Jan secretly meets with a restorative justice (RJ) practitioner. Robert firmly rejects RJ as a viable option, but while Damon settles into prison life, and without telling her husband, Jan pins her hopes on a successful RJ meeting with Damon, which finally takes place two years after the rape.

Why did you think this was an important play to write?

I teach creative writing part-time at a prison, but I wanted to write something where the focus was on a character who has been a victim of crime. I also wanted to write a story with a strong female role in the hope that, if the narrative were well developed, the RJ meeting between Jan and Damon would make for powerful theatre.

Stronger is inspired by real events. I met a woman in the UK a few years ago who had engaged with restorative justice in similar circumstances to those in the play. She said she did so in order ‘to regain control of her life’. She was incredibly determined and brave, and I have tried to reflect those traits in the character of Jan, although I have transferred the story to an Irish setting.

I wanted to highlight the work of the Probation Service in delivering restorative justice in Ireland, to show how it can provide catharsis and solace to those who have been through the justice system, helping individuals on both sides of the offence. When I approached the Probation Service at an early stage of the writing, they gave me the encouragement and support I needed to complete a first draft. Their support has not wavered; it is thanks to them and Gúna Nua that Stronger will now be staged as a full production at this year’s Dublin Theatre Festival.

What impact does participating in restorative justice have on the main characters?

I wanted to show how RJ could benefit both the victim and the offender. To do this, I needed both characters to be fully formed and their relations with family members to be drawn out. Through their engagement with RJ, Jan’s self-worth and mental health improve, while Damon steps out of his brother’s shadow to acknowledge what he did and accept the sentence he has received.

In other words, one finds solace outside of what is deemed to be the traditional justice system, while the other admits his place within it. Without alluding to the Criminal Justice (Victims of Crime) Act 2017 (the setting of the play pre-dates it), Stronger shows the value and importance of providing essential support, rights, and protection to victims of crime.

Having written this play, how would you like to see restorative justice develop in Ireland?

Based on my experience of teaching in prison, most inmates do not seem to be well informed of the potential benefits of RJ. Although it has gained some momentum here in recent years, I hope Gúna Nua’s staging of this play will bring greater awareness generally, even in cases of violence and sexual crime.

“By combining the voices of the arts and the Probation Service to raise public awareness of restorative justice, I hope that we will extend knowledge and understanding of the RJ process beyond the experts, so that the general public regularly begin to request and seek it out. This will create a greater need and continued pressure for the broadening of the availability of restorative justice in Ireland. “

Stronger is part of the Dublin Theatre Festival 2021, with performances at Smock Alley Theatre, Dublin, from 30th September to 9th October at 7.30pm, and matinee performances at 2.30pm on Saturday 2nd October, Sunday 3rd October and Saturday 9th October. Bookings can be made via the Stronger page on the Dublin Theatre Festival Website from 24th August at midday, or via the Gúna Nua website.

The production of Stronger is accompanied by a public forum on restorative justice as part of the Dublin Theatre Festival Talking Theatre programme. Taking the form of a webinar, the forum will feature a discussion on the restorative justice themes raised in the play. The webinar will open with a panel discussion chaired by Tim Chapman (Chair, European Forum for Restorative Justice), with panelists Noeline Blackwell (CEO, Dublin Rape Crisis Centre), Dr. Ian Marder (Assistant Professor in Criminology, Maynooth University), Geoff Power (playwright, documentary maker and writer of Stronger), as well as a representative of the Probation Service and a legal practitioner. Questions will be opened to the public. The webinar on restorative justice can also be booked on the event page.

To keep up with news on social media, follow us on: