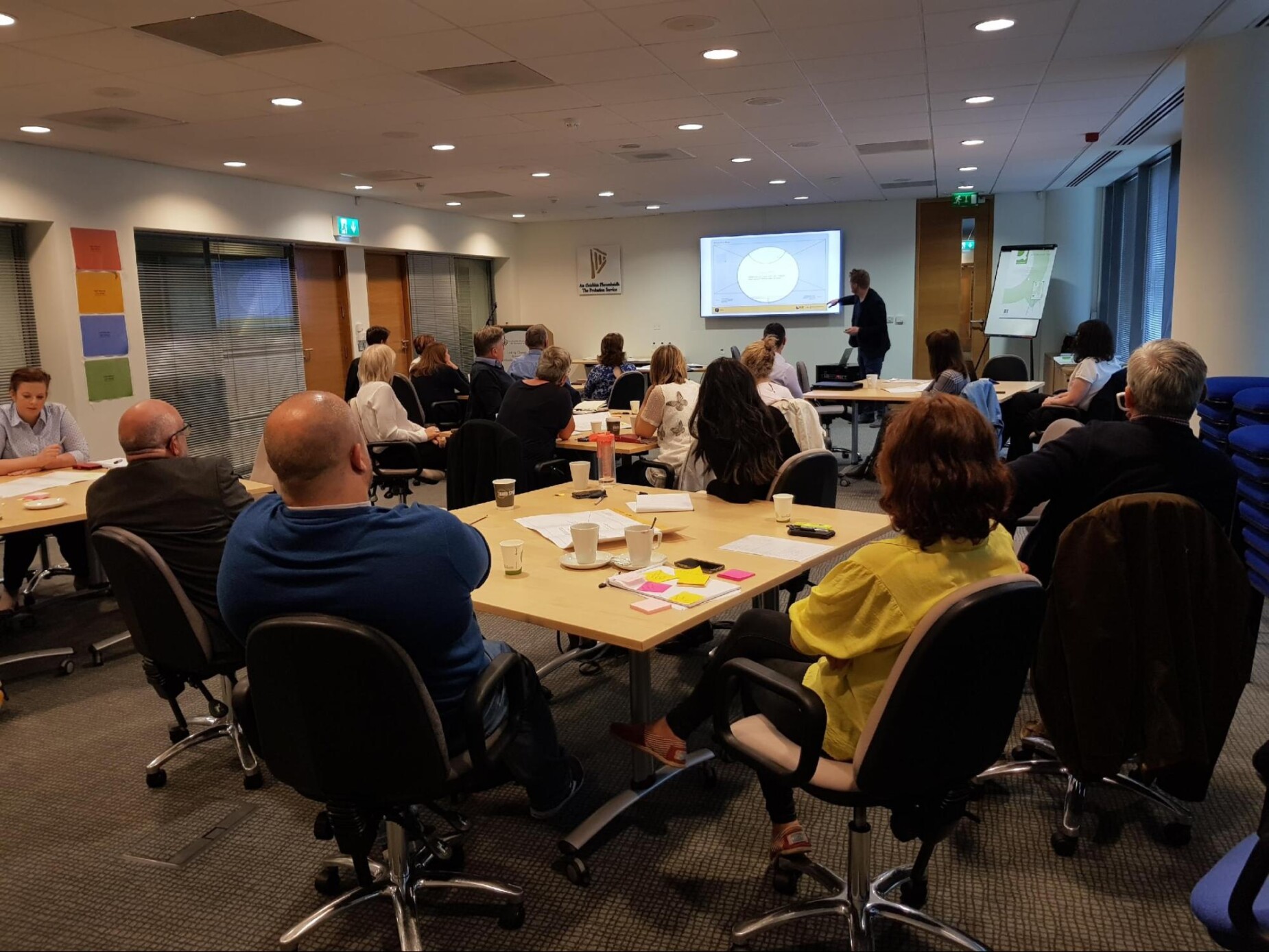 On Wednesday August 21st 2019, the Restorative Justice: Strategies for Change (RJS4C) team organised a one-day workshop. Hosted by the Probation Service, and facilitated by Trevor Vaugh from Maynooth University’s Mi:Lab and Department of Design Innovation, the workshop brought together around 25 stakeholders from across the criminal justice system to discuss how we might collaborate to develop restorative justice services in Ireland.

Representatives of the Department of Justice, the Probation Service and Young Persons Probation, the Irish Prison Service, An Garda Síochána, the Garda Youth Diversion Projects and the Department of Public Prosecutions attended the event. Also in attendance were an academic, a defence solicitor, and representatives from restorative justice services and victim and offender advocacy NGOs.

The day started with a welcome address by Ursula Fernée, who leads the Probation Service’s Restorative Justice and Victim Services Unit, and who is one of the Core Members of the RJS4C project for Ireland. Next, Dr. Marder gave a short presentation to contextualise the day. He noted that the purpose of the event linked directly to the implementation of Pillar 1 of the RJS4C Irish strategy on the accessibility of restorative justice. As such, the event was predicated on the idea that access to restorative justice for those harmed by crime, and those responsible for that harm, should not depend, in the absence of other considerations, on where the offence took place, the type of offence or the age of the parties.

Next, Maynooth University’s Trevor Vaugh introduced the group to design thinking, before facilitating two short exercises based on the responses to a pre-workshop survey that has been completed by attendees. The purpose of the first exercise was to assess what the group reported to be their ‘winning aspirations’ for the project and to select those which were most favourable to the participants. After voting, the top aspiration indicated that the group wanted:

Restorative justice was a participatory, positive and win-win approach (pull)

The third exercise involved identifying some of the most important stakeholders in the development of restorative justice in Ireland. Each small group came up with five relevant persons before selecting and ‘giving life’ to a specific ‘character’ on whom to focus. The five groups ultimately created one persona each, namely:

Each table then sought to empathise with their group’s character in order to establish their frustrations and fears, what they saw and heard around them, what they felt that they had to do, and several other characteristics of the person and their employment or surroundings.

The groups used these insights to come up with a series of ideas as to how this person could be engaged on the subject of restorative justice. For example, Dr. Marder’s group, who focused on the busy Garda, established that elements of the Garda culture might perceive restorative justice as something that is only appropriate for children and reflects a ‘softer’, and therefore less desirable, part of policing. Their idea was to produce a short video illustrating how restorative justice represented a normal set of communication and conflict resolution skills that Gardaí could use to help them resolve some of the more intractable conflicts they deal with on a day-to-day basis, such as neighborhood conflict and anti-social behaviour. A Garda who had experience of restorative justice would deliver screenings of the film, followed by a Q&A and an offer of training for those who wanted to develop their skills in this area.

The project will continue apace with the first meeting of the Pillar 3 (Cultural Change) Working Group to take place in September, hosted by the Childhood Development Initiative in Tallaght, Dublin.