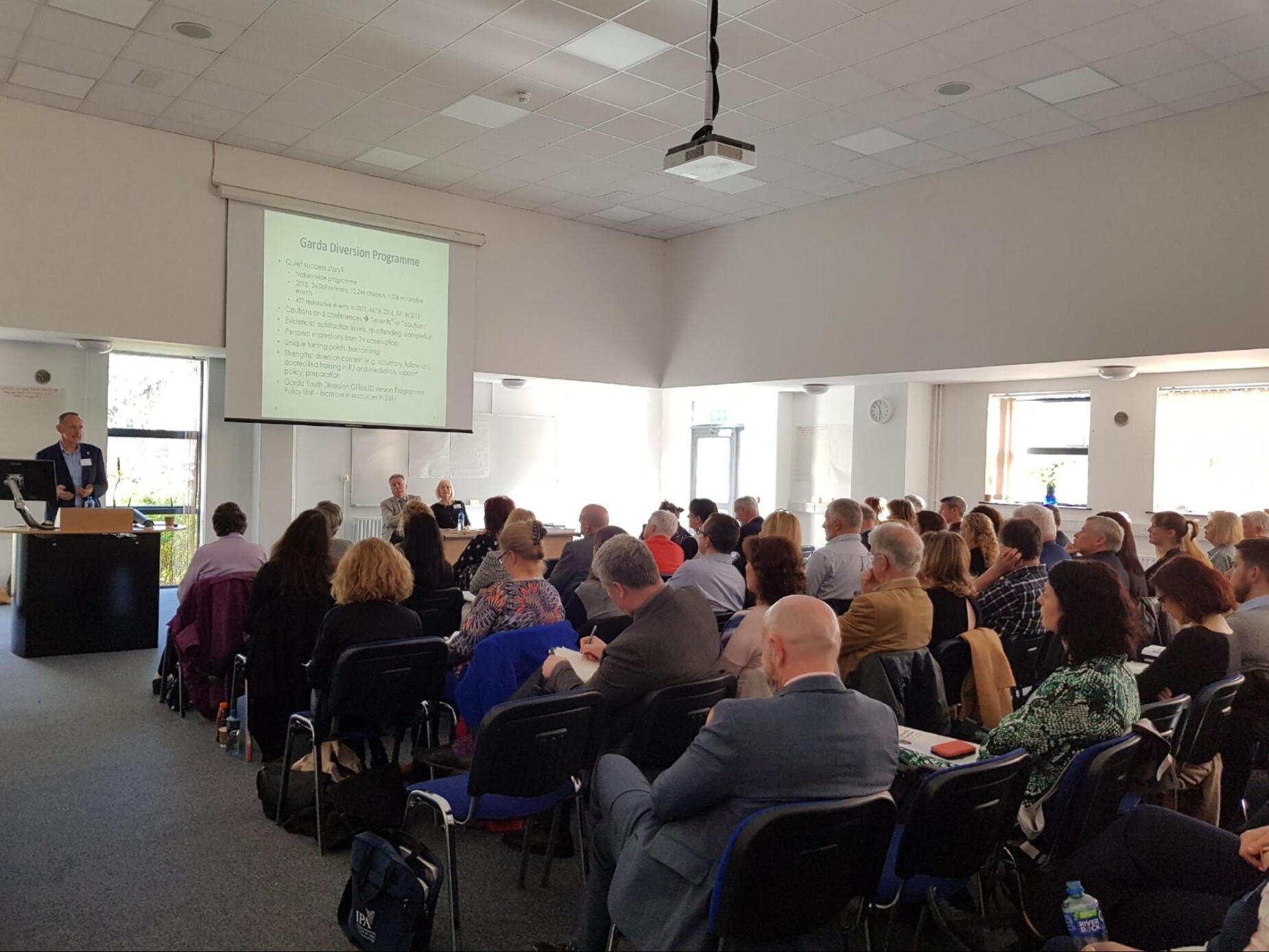 On Friday March 1st, around 100 people gathered at Maynooth University to participate in a vibrant one-day symposium on the development of restorative justice in the Irish criminal justice system. Attendees included senior and frontline representatives of An Garda Síochána, the Irish Prison Service and the Probation Service, policymakers from the Department of Justice and Equality and the Department of Children and Youth Affairs, judges and solicitors, academic researchers, and managers and practitioners from victim support and restorative justice services, among others. Northern Irish criminal justice agencies were also well represented.

The event launched the Irish arm of a new cross-European project, entitled Restorative Justice: Strategies for Change. This four-year project seeks to stimulate the implementation of the new Council of Europe Recommendation concerning restorative justice in criminal matters. The purpose of the symposium was to bring together a broad stakeholder group to co-create a strategy to achieve this goal. Similar activities will take place in nine other participating jurisdictions – Albania, Belgium, Czech Republic, Estonia, Italy, the Netherlands, Poland, Portugal and Scotland – in the coming months.

The symposium was co-organised by the project’s four Core Members for Ireland: Dr. Ian Marder (Maynooth University Department of Law), Ursula Fernée (Probation Service), Tim Chapman (Ulster University) and Dr. Kieran O’Dwyer (Edward Kennedy Institute for Conflict Intervention). It began with inputs from each co-organiser, touching on the details of the Recommendation, the role of the European Forum for Restorative Justice in developing values and standards for practice across Europe, the responsibility of the Irish Probation Service for the development of restorative justice, and the status and use of restorative justice in the Irish criminal justice system.

Participants spent the rest of the day engaged in structured discussions. In the morning, attendees were invited to write their answers to several questions relating to the enablers and barriers to restorative justice in Ireland. For example, they were asked to identify the existing strengths of the Irish field, the easiest changes which could be made and the support they would need to develop restorative justice in their own work. These answers were analysed to determine themes for the afternoon’s discussions, which included political, public and judicial engagement, victim participation, the use of restorative justice with serious crime, its application as a diversion from court, and the resourcing of its wider implementation.

In the afternoon, attendees were divided into seven groups, comprised of people from a variety of backgrounds. They were asked what they believed the project’s priorities should be, what they thought in relation to the theme which their group was assigned, and what they could each do to support this work going forward. The discussions were facilitated using circle processes, a type of restorative practice which enables all participants to have an equal say in a structured discussion. Throughout the day, attendees’ inputs were collated by the co-organisers and volunteers. These materials will be used to inform the writing of an Action Plan to guide the project’s activities in the coming years.

The day finished with a closing panel, chaired by Prof. Claire Hamilton from Maynooth University’s Department of Law. This began with Dr. Susan Leahy from the University of Limerick giving her views on the role of restorative justice with sexual violence, before the Director of the Probation Service, Vivian Geiran, closed the day by giving his reflections on the event and the project more broadly.

The symposium was made possible with support from the Maynooth University Conference and Workshop Fund, Vanessa Gallagher and Prof. Michael Doherty from the Department of Law, and several volunteers. On April 25th and 26th, the Core Members from all ten jurisdictions participating in Restorative Justice: Strategies for Change will gather at Maynooth University for their first project meeting, a two-day event which will also be funded by the Department of Law.

You can find more pictures from the event and tweet us your views by using the hashtag #RJIreland.

You can find coverage of the event in the Irish Legal News here.